NIH RESEARCH FUNDING CONTINUED TO BE A DRIVER OF U.S. ECONOMIC ACTIVITY AND JOB CREATION IN 2019

Nearly 476,000 Jobs and More Than $81 Billion in Economic Activity Supported

WASHINGTON, DC – February 13, 2020 – Data released today by United for Medical Research (UMR) show that research funding provided by the National Institutes of Health (NIH) in 2019 had a significant economic impact across the United States, supporting jobs and economic activity in every state and the District of Columbia. UMR’s annual report, “NIH’s Role in Sustaining the U.S. Economy,” found that in fiscal year 2019 NIH research funding supported 475,905 jobs and $81.22 billion in economic activity.

“Thanks to strong bipartisan, bicameral support for medical research, the NIH has recently experienced successive years of budget increases. Congress has continued to prioritize NIH funding, and that has had an immediate, positive impact on countless local communities across their districts and states,” said UMR President Chol Pak. “Every dollar invested in NIH research has an exponential impact by supporting discovery, improving health and spurring the economy.” 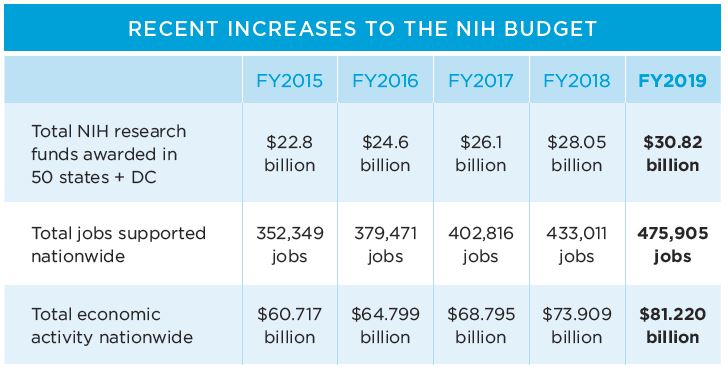 In fiscal year 2019, the NIH provided $30.82 billion in extramural research funding to scientists in all 50 states and the District of Columbia. This funding directly and indirectly supported 475,905 jobs nationwide. In 13 states, 10,000 or more jobs were supported by NIH research funding. The income generated by these jobs, as well as by the purchase of research-related equipment, services and materials, when cycled through the economy, produced $81.22 billion in new economic activity in 2019. In 21 states, the economic activity generated exceeded $1 billion.

“Given both the opportunities of biomedical research and the tremendous health challenges we face, continued strong investment in NIH research is essential. This report illustrates how recent increases to the NIH budget approved by Congress are already making a difference in terms of grants, jobs and economic activity. We encourage Congress to continue this positive momentum and to continue to invest strongly in America’s health through the NIH,” said Pak.

UMR is a coalition of leading research institutions, patient and health advocates and private industry seeking steady and sustainable increases in funding for the National Institutes of Health in order to save and improve lives, advance innovation and fuel the economy. Learn more at www.unitedformedicalresearch.org.