Samuel Achilefu: Taking the Guesswork Out of Cancer Surgery

In 2016, nearly 1.7 million people in the United States alone will be diagnosed with cancer. For many of these people, treatment will involve surgery to remove the cancer. However, because it’s very difficult for the naked eye to distinguish between normal tissue and cancerous tissue, standard protocol requires doctors to remove the tumor as well as some surrounding tissue. If this tissue is found to contain cancer cells, which can happen in as high as 40 percent of cases, the patient often faces a second round of surgery. Samuel Achilefu and his research team at Washington University in St. Louis have developed a simple, but powerful solution that might significantly improve these odds. Their cancer goggles, used with a special imaging dye also developed by Achilefu, illuminate cancer cells and it easier for surgeons to remove all of the cancer the first time around. 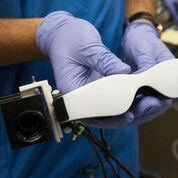